Usually I like to use this forum to discuss our neighborhood's positives. However I think it's important to start looking at some of the problems facing our part of town. I've been giving it a lot of thought lately and I would like to hear as many opinions on the matter as possible.

While many people have opinions about what is happening in our neighborhood, there is some solid information we can look at to get a bigger picture. Let's look at some of the facts that have become available lately thanks to the Census Bureau, Erie City Police reports, and the Erie Times-News.

The Census Bureau, for research purposes, divided the City of Erie into 30 "census tracts". The tract our neighborhood is located in very closely follows the map that we have created for our neighborhood association, with the addition of a few blocks on the other side of Old French Road. Out of the thirty census tracts in Erie, our neighborhood has the 6th lowest percentage of people living under the poverty level, which many people would consider to be good news. But there is more. Our census tract has the 18th highest rate of gun crimes, according to the Census information analyzed by the Times-News, easily considered to be bad news.

This causes stress for the residents of our neighborhood. I have seen it in the complaints I get from concerned neighbors. I have heard it in the comments people make at meetings. There is stress because people who have spent their lives building their homes into something they can be proud of expect to not hear gun fire on a regular basis, or at all.

I am not sure how to solve this problem, other than to be aware of the steps to take in the event of something unsafe happening. I suppose this is a good time to re-post... 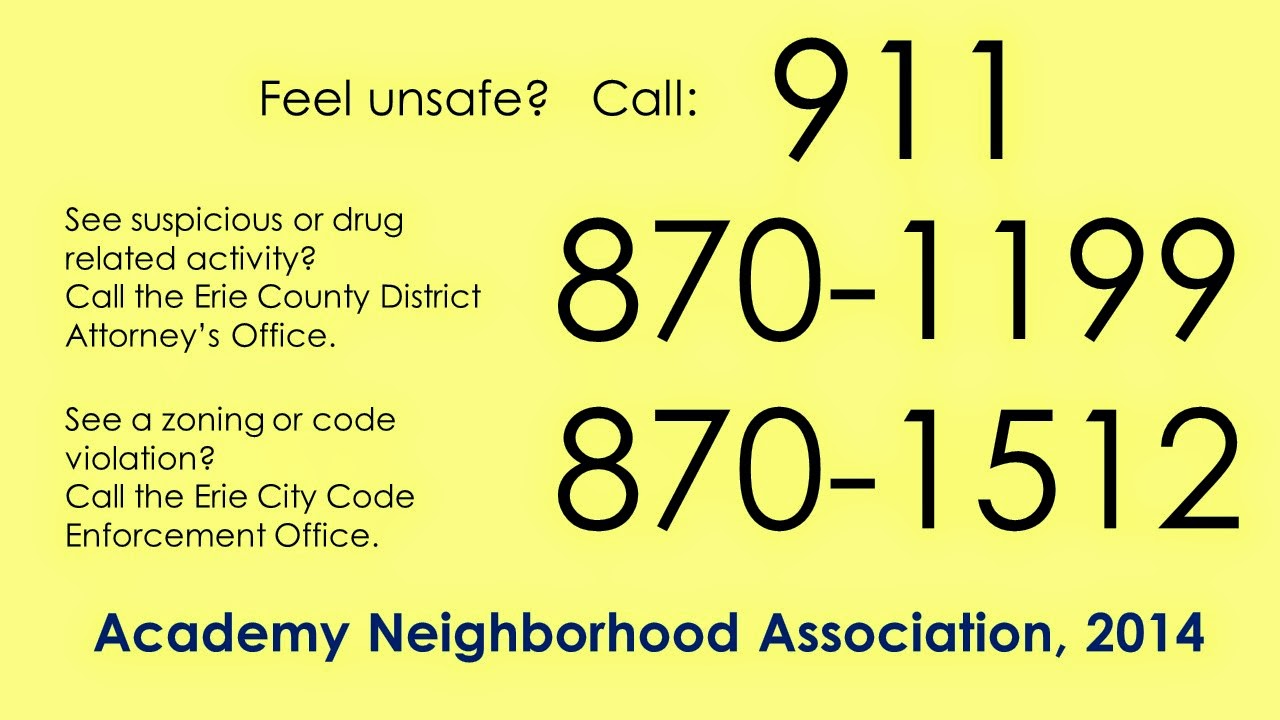 Our neighborhood has conflicting expectations, based on multiple conversations I have had with residents and my own observations. Generally, we have two groups of people in our neighborhood, with two sets of expectations about how to maintain property and act in public. There are people who care and people who do not. Generally, the people who care maintain their property, act courteously toward their neighbors, and expect to be safe in their homes. The people who do not care slowly erode the value of their homes (either rented or owned), are discourteous (at best!) and have lower expectations concerning their own safety making them more likely to act unsafely. This creates stress for the people who care, and who sometimes feel helpless to change the actions of others.

Problems #1 and #2 are more difficult to solve. They require action and cooperation from law enforcement and city and school officials. But this leads me to...

Neighborhood Problem #3: Lack of organization and lack of resources directed to our neighborhood

This is the area that we can most easily address through the Academy Neighborhood Association. We can work together to make the neighborhood a better place. Is planting a small pallet garden on East 32nd Street going to stop someone from shooting a gun at East 27th and Parade? Probably not. But the small steps we are taking are going to hopefully add up to some bigger steps over the next few years.

Over the summer I have realized we are on a much longer journey than I initially thought. Every time the organization takes a step forward I see further down the road, and I'm realizing the road does not end. That's why I'm sharing these thoughts. I want to know what other people think about the problems in our neighborhood and how they think we can solve them. I also like to hear people's ideas for projects, long and short term, that we can work on together. Please feel free to share on the facebook page, in the comments sections of this blog, or by emailing academy.neighborhood.erie@gmail.com.
Posted by Academy Neighborhood Association: Bob Hand at 11:07 AM