"We've been talking about it for years."

That's what Paul Aldridge had to say about replacing the aging, single pane wood windows on a home he owns on E. 28th Street in Erie.  "We simply could not have done this without the thousand."

The "thousand" Aldridge is referring to is the one thousand dollar grant he was awarded through the Academy Neighborhood Association's Revitalize E28 program. The program, funded by the Erie County Gaming Revenue Authority's Renaissance Block Grant Program, awards property owners up to one thousand dollars in matching funds for home improvements.

Aldridge is the third recipient of Revitalize E28 funds. The program is designed to reward reinvestment in properties along E. 28th Street in the Academy Neighborhood. The E. 28th Street corridor was chosen based on the Erie Refocused Plan, which specifically mentions E. 28th as an area to focus improvement efforts. The Renaissance Block Grant specifies that improvements should be "front facing" and be designed for maximum impact on the neighborhood at large. The Aldridge family utilized a local vendor, Window World of Erie, to replace seven front windows with double-pane, gas filled, vinyl windows designed for energy efficiency. 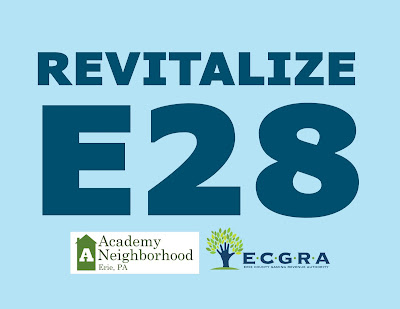 Five things to know about the planning process:

TWO: The City of Erie is making this happen led by Erie City Planner Kathy Wyrosdick. The Erie Refocused plan calls for each neighborhood to be researched and a plan for best practices in each neighborhood to be created. This might be happening whether or not the Academy Neighborhood organization existed - but the fact that this organization does exist has made it easier for the City Planning Department and “get the word out” to the residents of Academy Neighborhood.

FOUR: Many people are working hard to make the plan a reality in the City Planning Department including Ms. Wyrosdic, Erin Carey, Paul Cancilla, and Krystal Otwerth. Mayor Schember has also gone door to door on a number of occasions to survey neighborhood residents and we have had a number of neighborhood volunteers who have completed property condition surveys.

FIVE: There are two ways information is being gathered about the neighborhood. 1. Property condition surveys 2. Personal and online surveys. That information will be used by the city to draw up a master plan based on the principles in Erie Refocused.

As the process continues it is going to be up to us, residents of Academy Neighborhood, to make sure that everyone’s voice is being heard and that decisions being made will benefit the most people.

Moving forward, we may need to rethink and reinvent just what this neighborhood organization IS. Is the work we’re doing smart and focused on what needs to be done to help the most people? Where should we focus our limited resources?

Posted by Academy Neighborhood Association: Bob Hand at 8:27 AM No comments: