Our neighborhood is home to one of the premier high schools in the state of Pennsylvania; Northwest Pennsylvania Collegiate Academy.

The "Collegiate" building is the signature building in our neighborhood and it has great historic value. The school also has great nostalgic value for the thousands who have walked the halls since the school opened in 1920 as Academy High School. I found this Academy High varsity letter in, of all places, Cici's Pizza in Harborcreek. 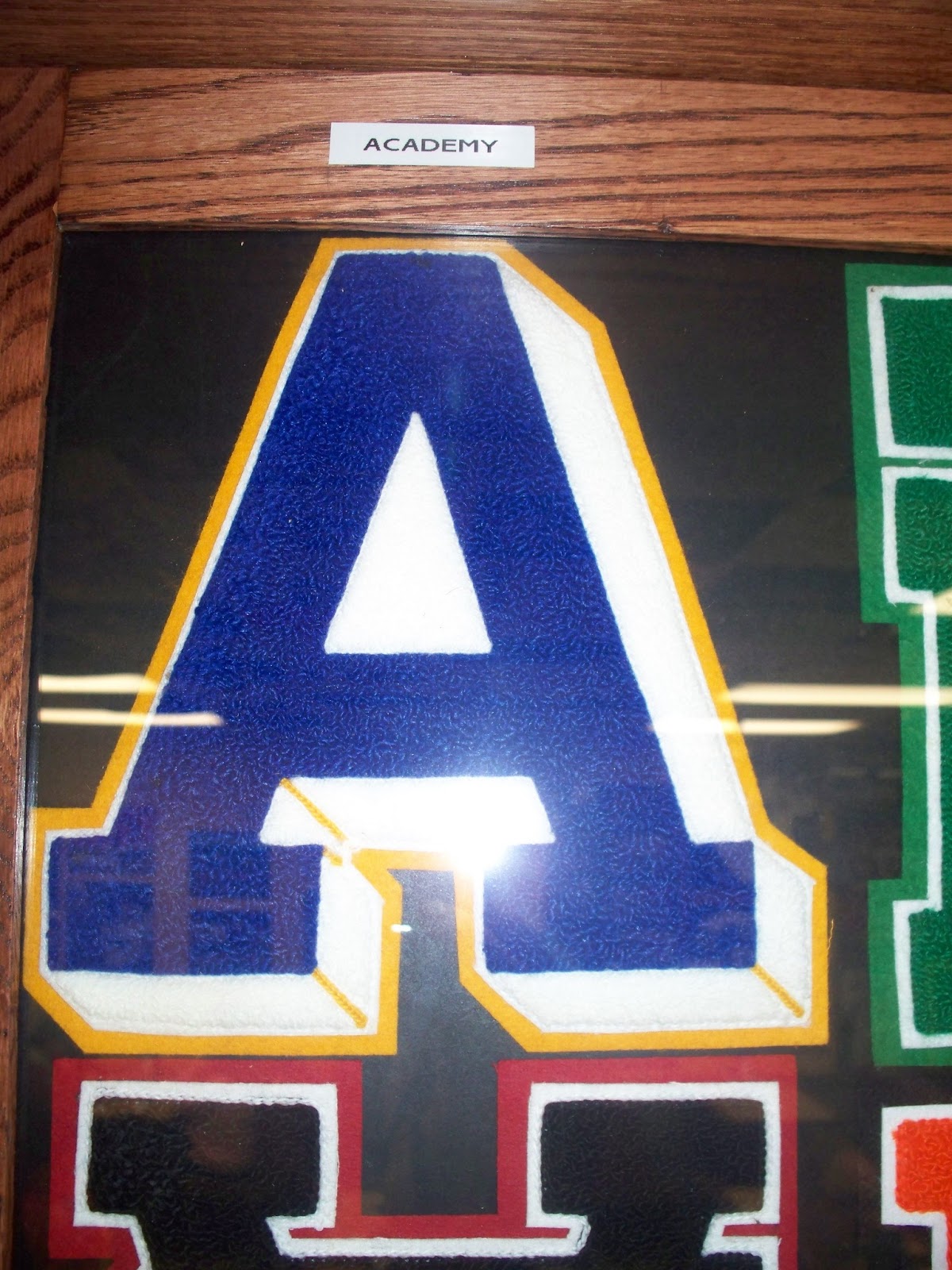 Every day hundreds of people with ties to the school visit our neighborhood. Students, parents, teachers, and staff all spend their days here. But what kind of impressions of our neighborhood do they leave with? Do they feel compelled to spend more time here? To buy a home here? To invest in a business venture here? If the answer to any of these questions is "no" then we know we have to start making some changes.

The first, admittedly very small, change I am hoping to make is to start making a list of neighborhood assets. Collegiate Academy is at the top of that list.

A few months back the Erie Times-News published a photo essay about the painted relief sculptures on the southern portion of the building. I had never, in my ten years of living on East 30th Street, taken the time to stop and look at these pieces of artwork. If I remember correctly, the article in the Times-News stated that the pictures were meant to depict the various trades someone who attended the school might find themselves working in after graduation. Here are photos of all six... 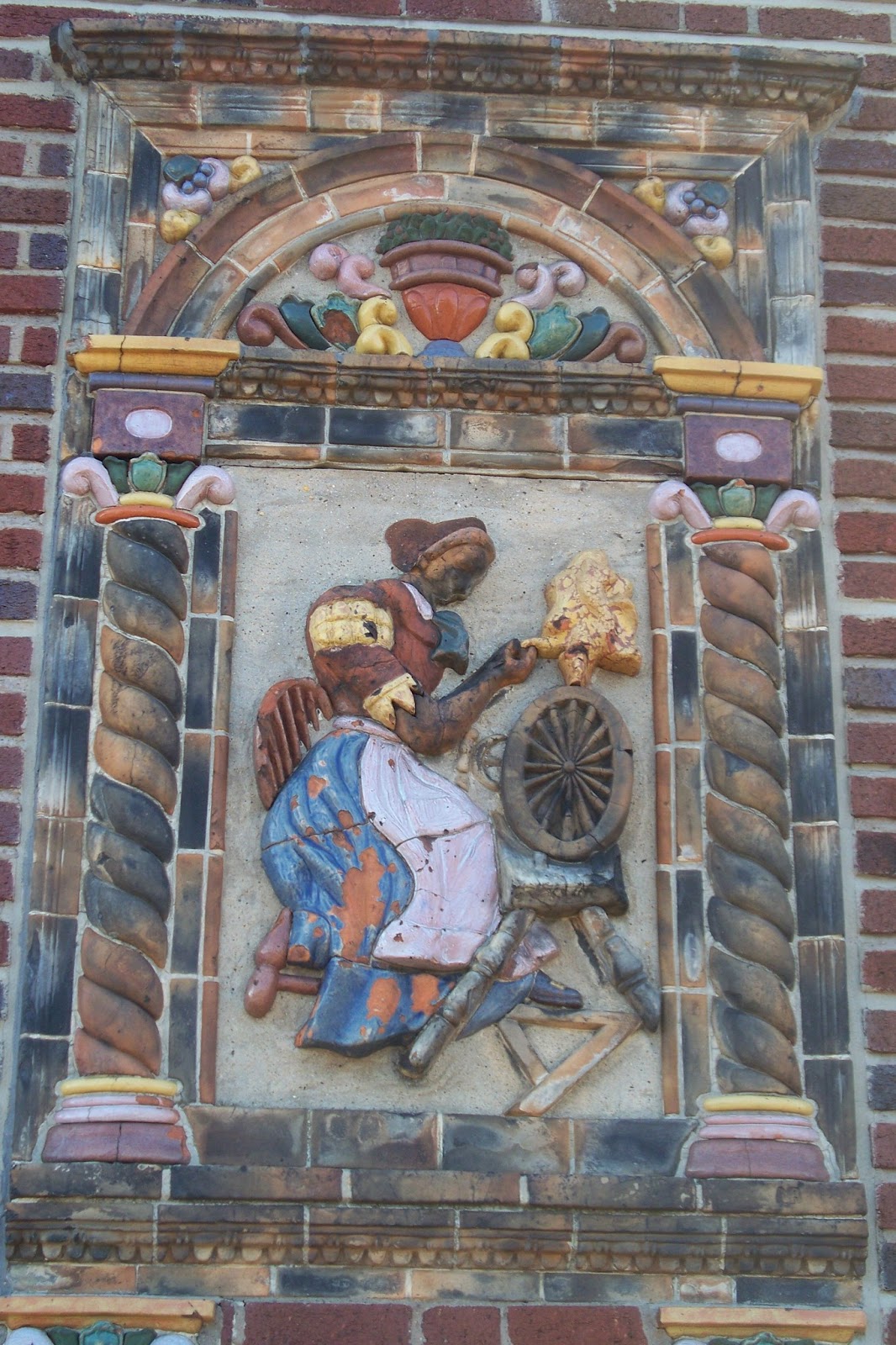 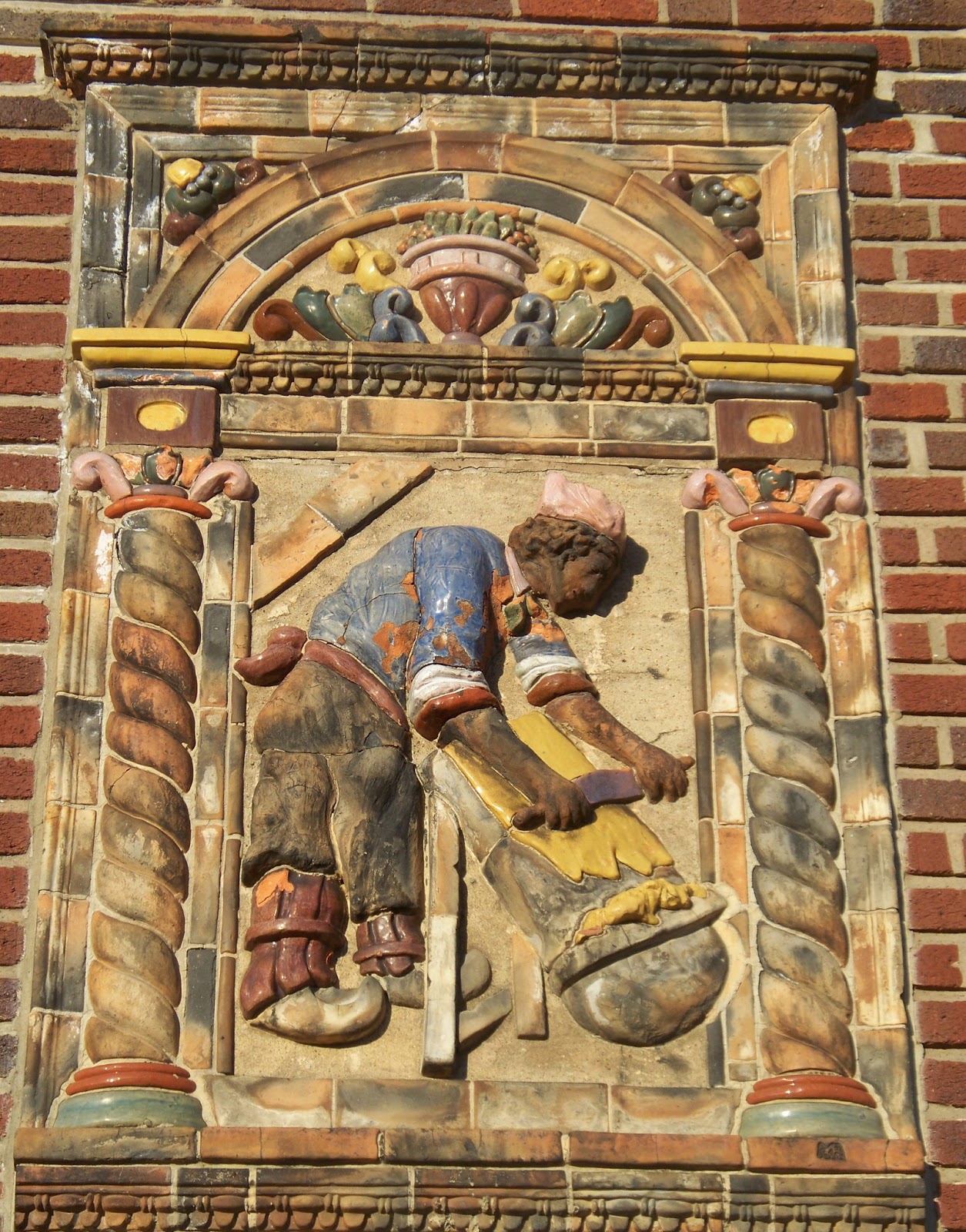 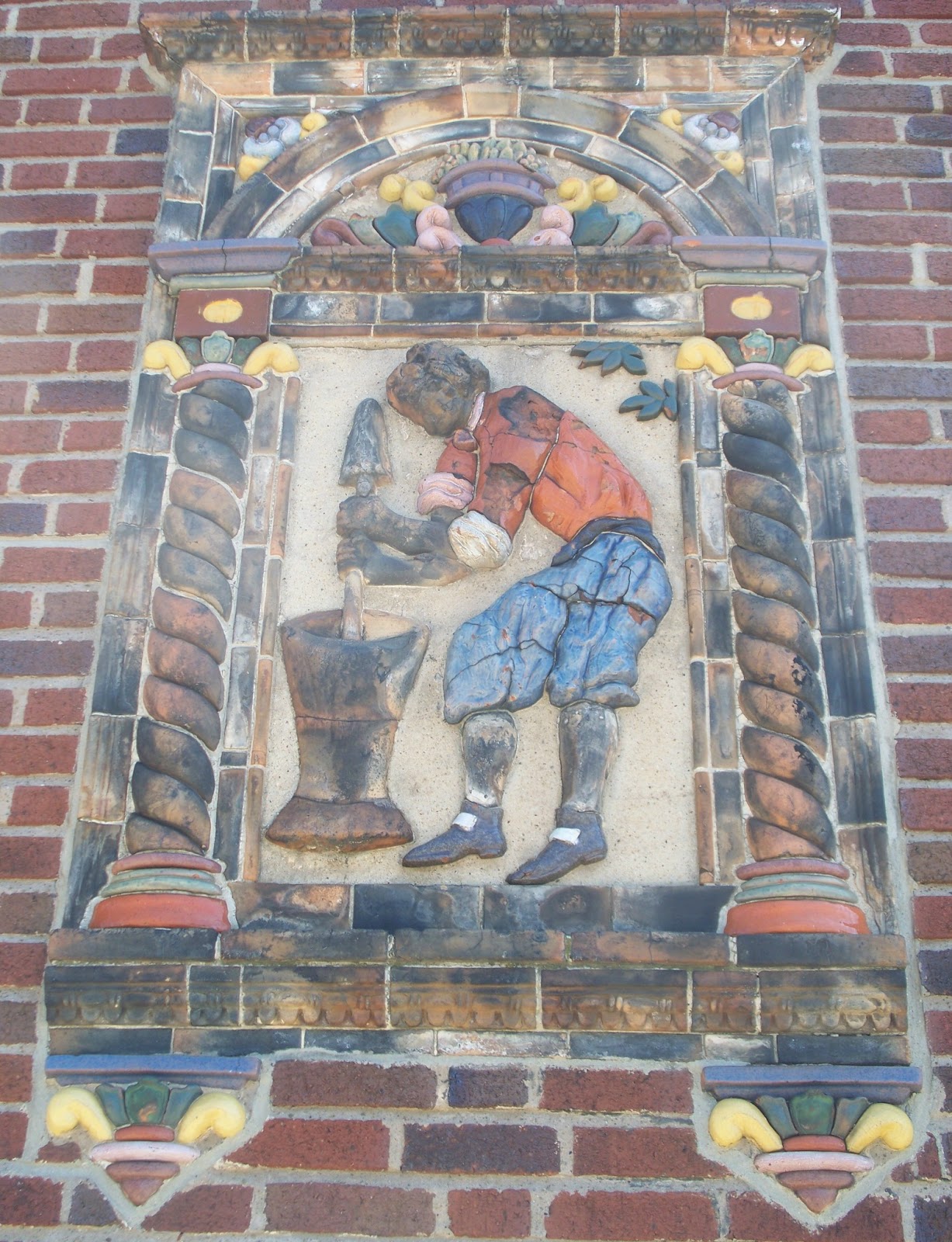 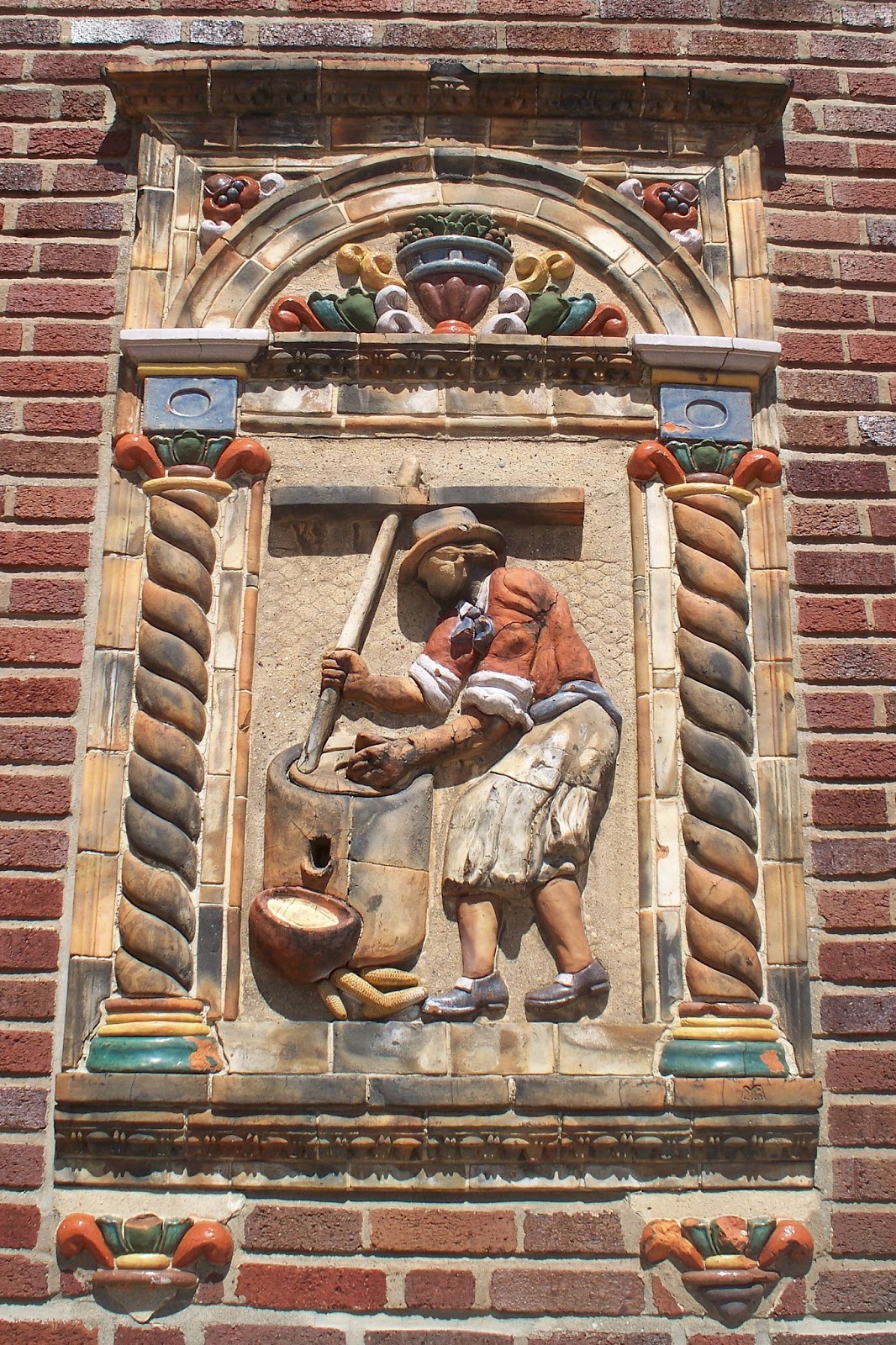 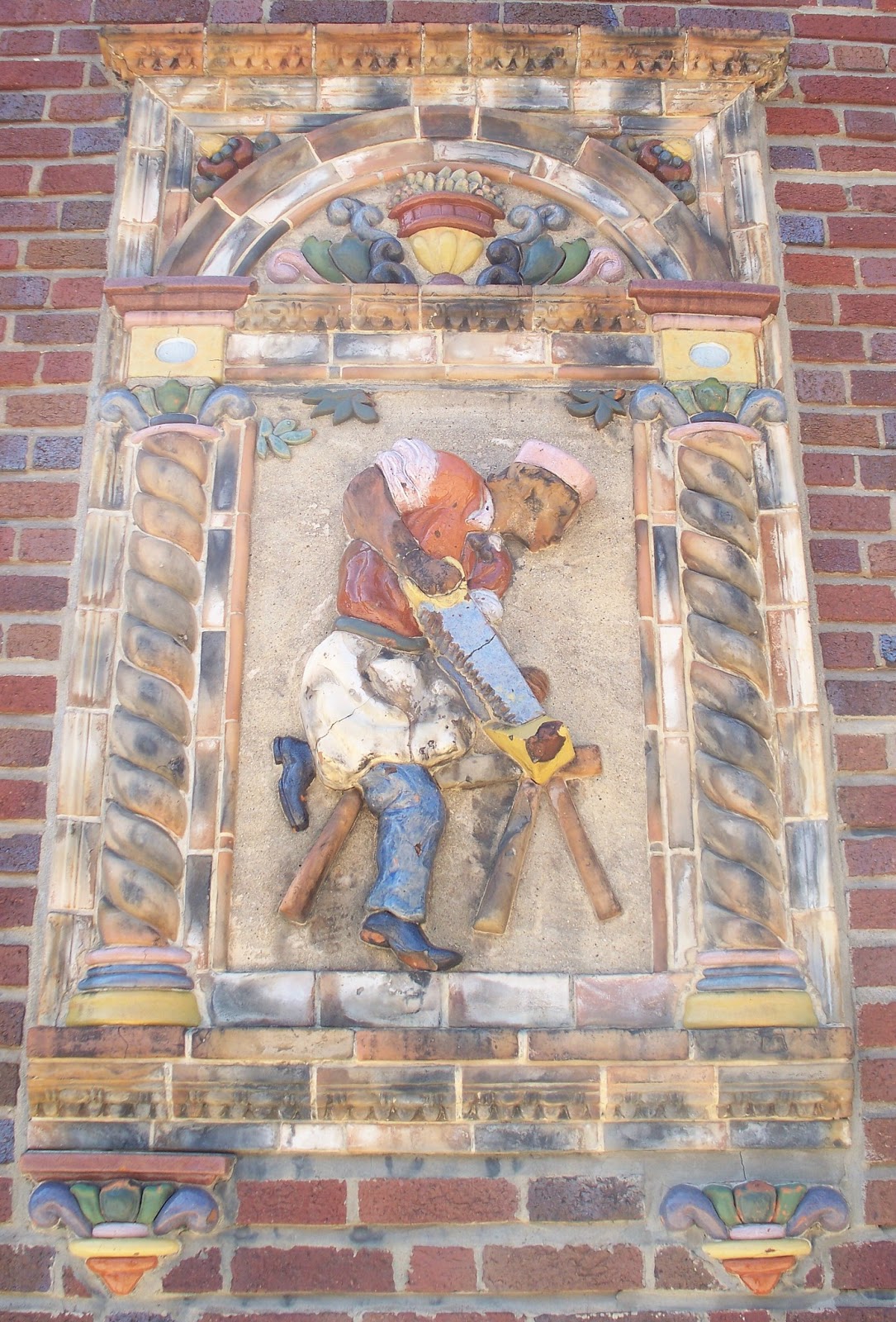 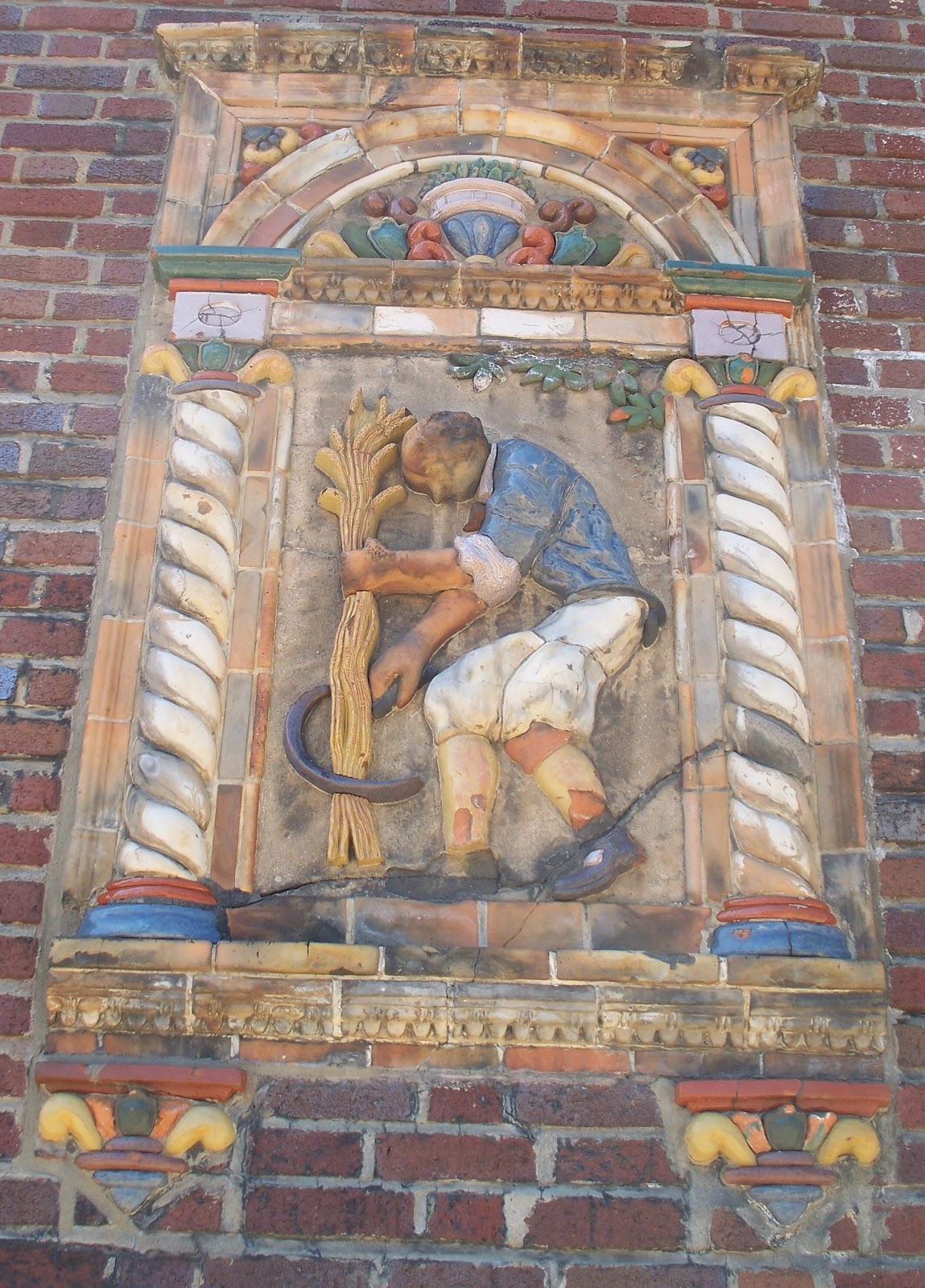 Posted by Academy Neighborhood Association: Bob Hand at 6:46 AM No comments:

My Saturday Story: There's a TV On Your Lawn!

I've had two old television sets sitting in my basement for a few years. When I read about this...

Now when the City of Erie stopped collecting televisions and other "covered" electronic items during the city's annual "Large Item Pick-up Day" it created a problem planners might not have foreseen. Many people either didn't know or didn't care that the city wouldn't be  disposing of televisions during large item pick-up, so they placed the old televisions curbside anyway.

That means there were about half a dozen (or more!) old, useless television sets sitting in front of people's homes for the last three weeks. The city wasn't picking them up, and the people that live in the homes weren't picking them up. So there they sat.

So I did it. I picked up old electronic items from three different houses. I have pictures and addresses from the homes but I've decided not to publish them, for now.

I drove my pick-up to Holland Street. There was a little bit of a line... 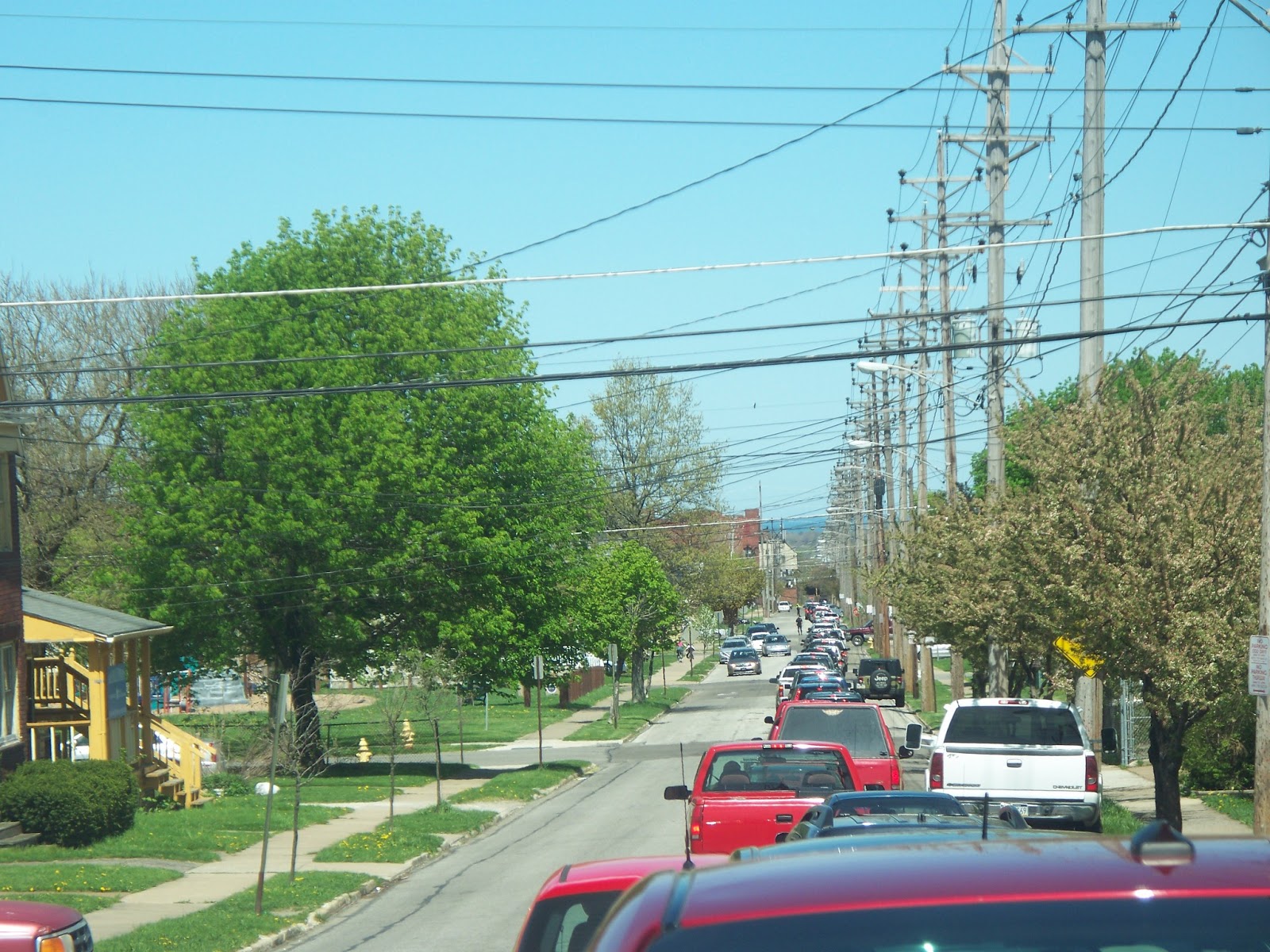 I used the time to think about what I was doing. Was I doing the right thing cleaning up the neighborhood to protect the value of my own home? Or was I sending the message, "You can be irresponsible with the things you don't want anymore. Just throw them in your front yard and someone will take care of it". I really wasn't sure.

So I'm asking you.

I spoke with a few friends and family members about the issue this weekend and they agreed on one thing. The people who left the televisions need to be told they were doing something wrong. Most agreed a letter would appropriate. I drafted two copies... 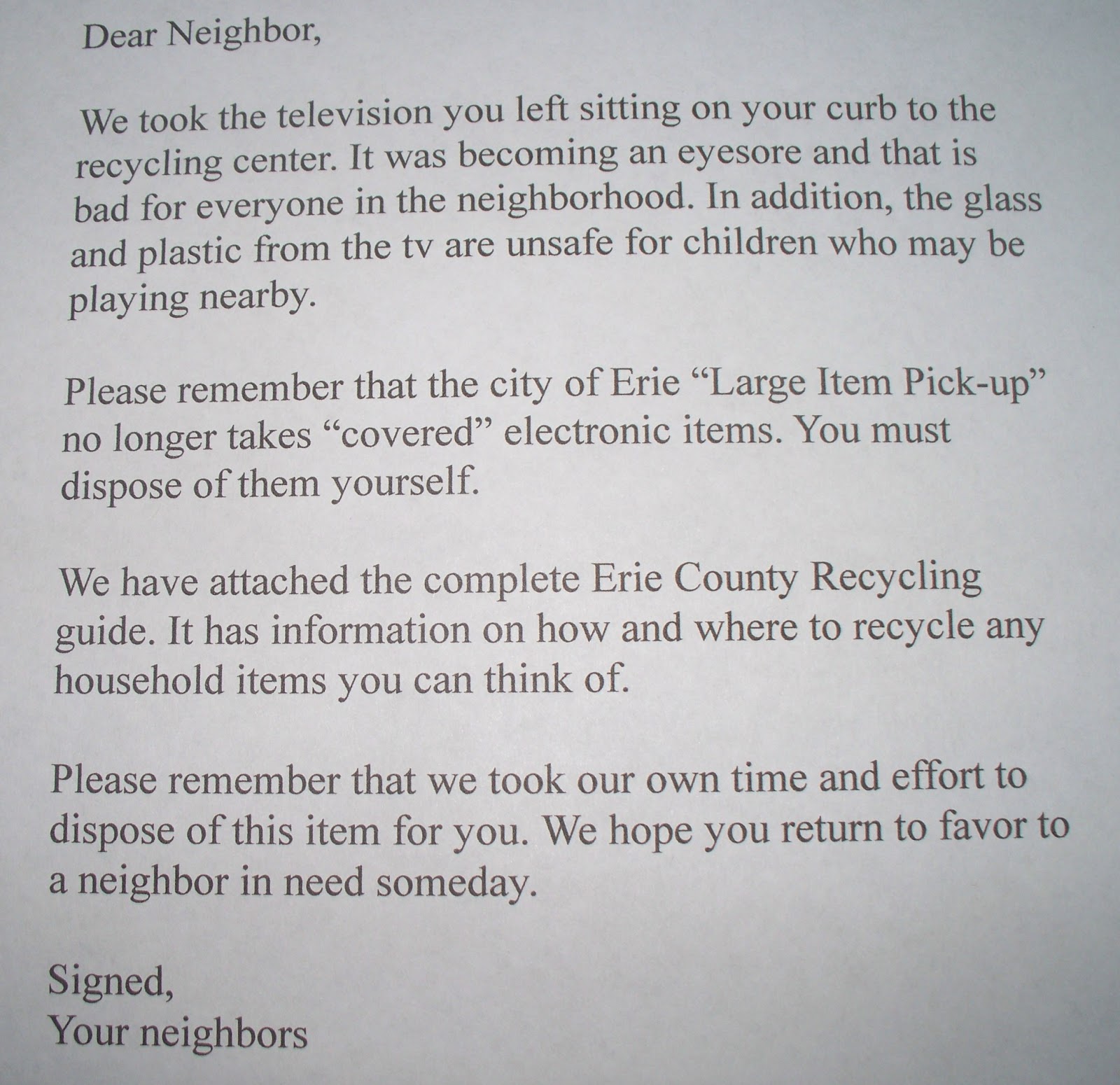 I suppose I used the word "we" in the letter because I am hoping I speak for many of the residents of the neighborhood. Now for the fun part. Here is version 2: 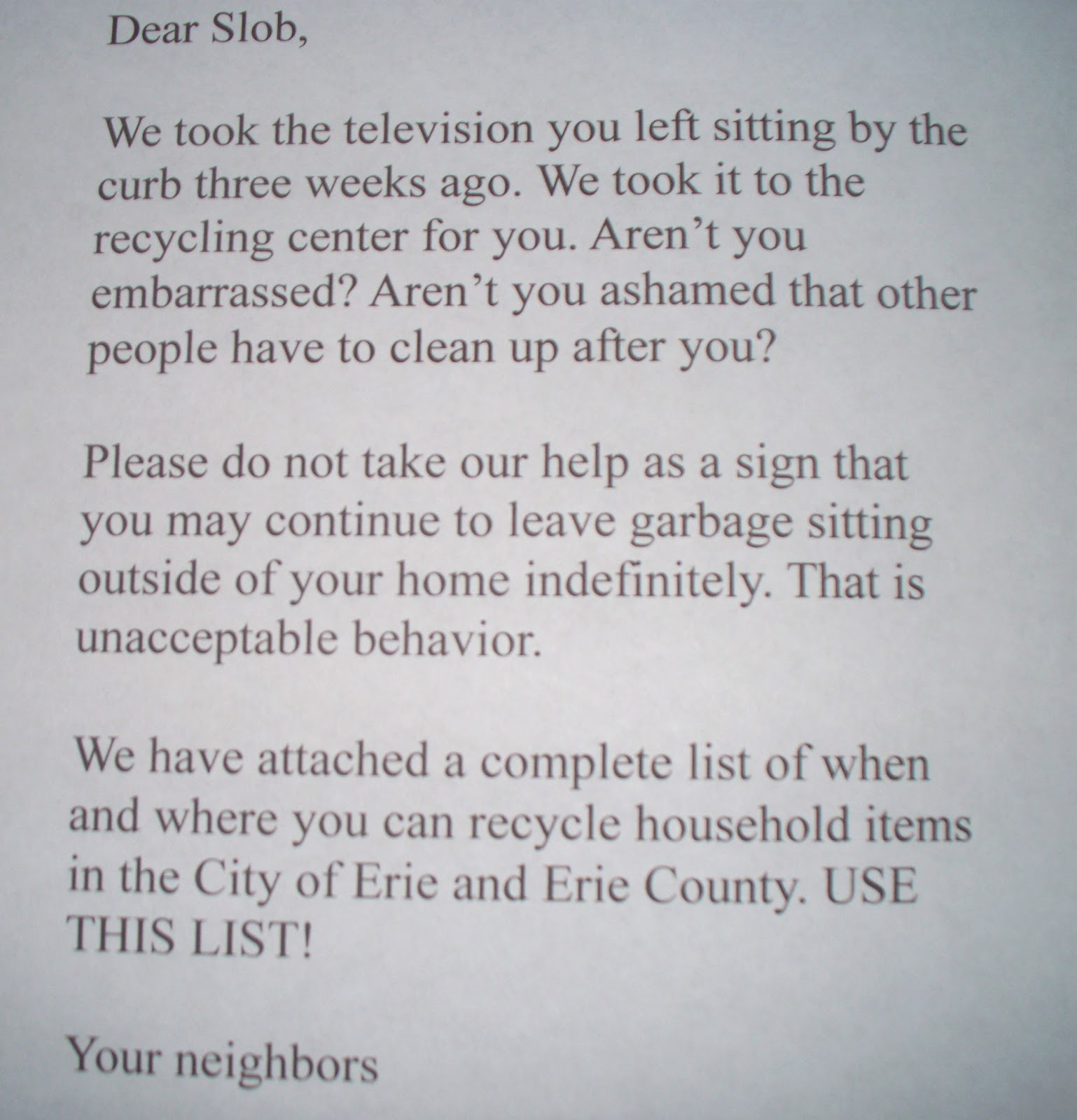 I think this version has merits. It's funny and direct. I also think it is harsh and unlikely to change anyone's mind about how to maintain their home.

Like I said I'm asking you. The "people-with-televisions-in-their-yards" will be getting one of these soon! Let me know which version you think it should be.